Marriott International to Double in Size in Europe

Starwood Merger to Increase Marriott’s Size to Over 100,000 Rooms in Europe 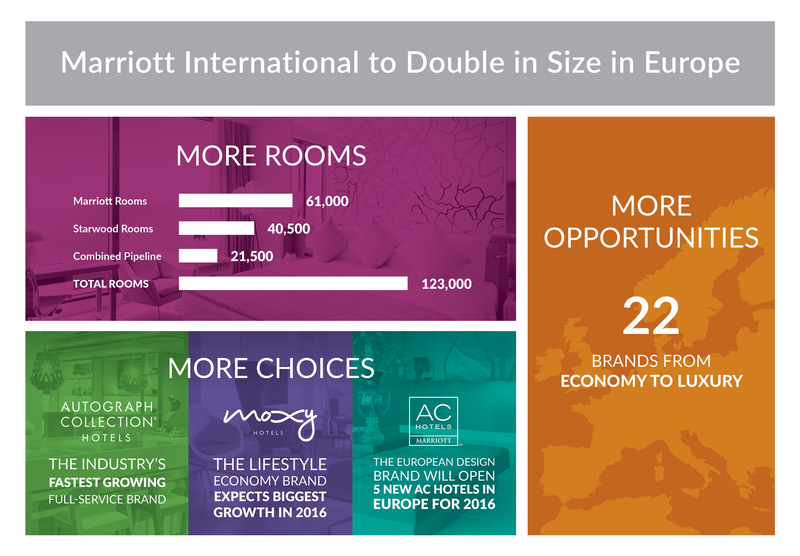 Marriott International in Europe, a division of Marriott International Inc., announces today that it will double in size once its acquisition of Starwood Hotels & Resorts Worldwide, Inc. is complete.  In Europe, the company will reach over 123,000 opened or signed rooms when Marriott’s 61,000 open rooms join with Starwood’s 40,500 open rooms and the combined pipeline of 21,500 rooms.

Amy McPherson, president and managing director, Marriott International, Europe commented, “It’s been an extraordinary time for Marriott.  We signed over 10,000 new rooms in 2015 for the first time in our history, doubling in size since 2010.  Added to this unprecedented growth was the announcement of our Starwood acquisition which is expected to close in mid-2016.  Our momentum is incredible.”

Marriott’s Autograph Collection, a collection of independent hotels and the industry’s fastest growing full-service brand, should open four hotels in 2016 including two Roomers hotels in Germany.  AC Hotels, the urban European design hotel brand, which has recently been introduced to the U.S. with great success, is expected to open 22 hotels globally and will launch in the U.K. for the first time in Manchester and Birmingham in May.  Moxy Hotels, Marriott’s lifestyle economy brand, should experience its biggest growth in 2016 with five new hotels expected to open by the end of 2016 and at least nine new hotels open by end 2017.   In addition, Courtyard Hotels should see its new contemporary design at three new hotels in Edinburgh, The Czech Republic and Brussels.

With over 4,400 rooms scheduled to open this year, Marriott’s Central and Eastern regions should account for over 70 percent of Marriott’s total European development.  Five new Marriott Hotels are expected to open in Germany, Belarus, Macedonia and Russia, and three new Moxy hotels should open in Germany, along with an AC Hotel in Mainz, Germany.  Two new Marriott Hotels opened in the Netherlands earlier this year along with an AC Hotel in Marseille.  In April, a new stunning Renaissance property is expected to open in Paris, the Renaissance Paris Republique Hotel, situated in the trendy Canal Saint Martin district.

In the UK, the London Marriott Hotel County Hall and Grosvenor House, a JW Marriott Hotel, two of Marriott’s most iconic and celebrated London hotels, should complete major renovations by spring of this year and the Moxy Hotels brand is expected to open its first UK hotel in Aberdeen.